This week’s announcement that French shipbuilder, DCNS, will undertake the future submarine build project here in Adelaide, is great news for students studying at St Patrick’s Technical College. Our team has developed a strong working relationship with ASC over the past ten years that has seen over 20 apprentices, mainly from the Electrotechnology and Engineering programs, gain apprenticeships at both the ASC North and ASC South facilities at Osborne. Many other StPatsTech student-apprentices and graduates have picked up apprenticeships with employers who supply to the submarine and Air Warfare Destroyer (AWD) projects.

As recently as 2014, one quarter of all apprentices at ASC were students and/or graduates of StPatsTech including: 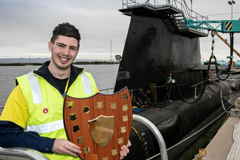 Anika Williams – a great role model for our female students and has been back to speak to our students over the past few years.

Mason Browning – recipient of the Australian Vocational Student Prize in 2014 and our own Electrotechnology Apprentice of the Year that same year.

Jarad Hearnden – featured in a ‘Where are they now?’ newsletter as part of the SA Government’s Advanced Technology Program in Aug 2014.

We are very excited about this week’s announcement and anticipate that demand for our Electrotechnology and Engineering student-apprentices will increase over the coming months and years. This, in turn, should see an increase in enrolment numbers in these courses given our proven track record assisting students gain apprenticeships in the defence sector.

We look forward to continuing our work with ASC, with DCNS and, through our association with the Defence Teaming Centre, the many defence industry employers across northern Adelaide.

Around our College school are different images of St Patrick. Because he lived well before the time of photography, we cannot be absolutely sure what he looked like. Throughout history however, different artists have painted and moulded their image of Patrick. On St Patrick’s Day (17 March) this year we added a new image of St Patrick to our school. 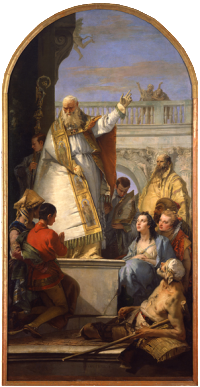 The new image is a print of a painting done in 1746. The artist is Giovanni Battista Tiepolo. Tiepolo was an Italian artist who worked mainly in Venice in the first half of the 18th century. He is considered as the greatest European artist of the 18th century. In many ways he broke a number of the rules that artists were supposed to follow at the time. He used bold colours and worked quickly. When he painted he said he had a vision and he needed to paint what he saw as quickly as possible before the vision was lost. One of his contemporary artist friends described Tiepolo as being ‘all spirit and fire’.

The new image was commissioned by the authorities in the Cathedral in Padua, a major town in Italy. It is interesting that 1300 hundred years after the death of St Patrick and in a place far away from Ireland, he was so well known that people asked for his image. At that time, 17 March was already being celebrated as St Patrick’s special day in that part of Italy.

The image shows St Patrick as a worker of miracles. The setting is not in Ireland but is more probably Venice. Different people sit and stand below St Patrick and they appear entranced by what he is saying and doing. There is a dishevelled dark haired woman, an old crippled man, a country woman with her son and a very well dressed blond woman wearing pearls. The artist appears to be saying that Patrick’s message is a message for all people. The artist has a message for each one of us today.

The College’s Miracle of St Patrick was blessed by the Catholic Archbishop of Adelaide, Philip Wilson, on 17 March 2016, and now hangs in the College Administration area.

St Patrick’s Technical College Class of 2011 graduate, Jack Donaldson, has been awarded the Alan Saunders prize as Apprentice of the Year at ASC this week. Jack’s achievement was reported in The Advertiser Business Daily feature on Thursday 31 March. Jack graduated from the College’s Metals & Engineering program and has undertaken his apprenticeship as a metal fabricator with the Osborne shipbuilder.

Jack is one of over 20 St Patrick’s Technical College students and graduates who have commenced apprenticeships at ASC Shipbuilding since 2010. At one point, a quarter of the apprentice intake at Osborne were products of StPatsTech including the shipbuilders first female electrical apprentice, Anika Williams, in 2011.