We were most fortunate to have renowned South Australian poet, Geoff Goodfellow, visit St Patrick’s Technical College today. He addressed our Year 11 cohort and delivered many of his poems.

Geoff’s poetry deals with a broad range of subjects; from life in the workforce, relationships with parents, as well as poems about his experiences with head and neck cancer. In particular, students enjoyed the poems Don’t Call Me Lad and The Seventh Doctor.

Geoff also delivered a strong anti-drug and anti-smoking message to our students, made even more powerful given his personal experience with throat cancer, which Geoff believes was a result of his smoking.

We were able to purchase two copies of Geoff’s new release of collected poems, Opening the Windows to Catch the Sea Breeze. This is a collection of Geoff’s poems from 1983-2011.

We have also added Geoff’s book, Waltzing with Jack Dancer: A Slow Dance with Cancer to our College library. Both of these texts will be used in our Workplace Practices and English classes.

It was fantastic to have Geoff here at the College and we look forward to a visit from him next year.

The itinerary for the inaugural St Patrick’s Technical College / JCB Academy UK Exchange has been confirmed with four students and two staff set to depart Adelaide on Sunday 21 September for an unforgettable experience.

Highlights of the 15 day trip include:

For the bulk of their time away, students will attend classes at the specialist senior secondary Engineering school located in the village of Rocester, Staffordshire; home to global construction equipment manufacturer, JCB.  Students will also visit local industry partners such as Toyota, Jaguar and the Rolls Royce Learning and Development Centre in nearby Derby.

The JCB Academy was established in 2009 as part of the UK’s University Technical Colleges program – following a similar launch as the Australian Technical College initiative under which St Patrick’s Technical College was founded in 2007.  Since 2011, our two schools have been engaged in an information sharing program which has included visits by staff to each others’ institutions.

Most recently, St Patrick’s Business Development Manager, Mr Patrick Kelly, spent a week at The JCB Academy investigating industry engagement strategy.  In September, Mr Hall and Ms Hamilton will have the opportunity to explore this further as well as share information on the contextualised teaching of Mathematics, Science and English.

The 2014 exchange is the first of the planned annual exchanges that will take place for local students heading to the UK in September / October, and students from the UK visiting St Patrick’s Technical College in February / March.

St Patrick’s Technical College and Xavier College are once again due to do battle in our annual sports carnival on Wednesday 4 June. This event has become much anticipated on each of our schools’ calendars since it began back in 2011.

The carnival is growing in 2014 to include girls’ netball for the first time. This will be in addition to cricket, football and soccer.

We are delighted to welcome back as our event sponsor in 2014, the Zorich Group, operator of Sportspower stores in Elizabeth and Gawler. The team at the Zorich Group have supported the annual StPatsTech v Xavier carnival since it’s beginning and we thank them most sincerely for their ongoing generosity.

All matches get under way at 11.30am and are scheduled to finish at approximately 1.15pm. A BBQ lunch will follow and a presentation ceremony concludes the event at 1.45pm.

Venues for the matches are as follows:

The last few days I have been attending the Catholic Technical and Vocational Colleges Network meeting in Melbourne. This has been a great opportunity to meet with principals from schools similar to St Patrick’s across Australia and discuss a range of issues that impact on us. It also helps to benchmark what we do with other technical colleges and get new ideas.

College Business Manager, Mr David Hurley, has also been involved in the discussions with colleagues from around Australia, which has been a useful exercise.

This is all part of the “re-visioning” and strategic thinking around the future of our college which is an important part of adapting to a changing political and education environment.

Preparations for our UK exchange program with The JCB Academy are proceeding very well. Business Development Manager, Mr Patrick Kelly, has recently returned from JCB and ensured that all arrangements are in place for the exchange in September.

Patrick also spent time at the academy meeting with staff and visiting industry partners. He has returned with a number of new developments in Vocational Education for us to consider as part of our strategic review.

The annual sports competition against Xavier is coming up in the next few weeks. This is a great day with contests in football, cricket, soccer and netball.

St Patrick’s is hosting the day with the football being played at Elizabeth Oval. Knock-out sport is continuing with recent matches so far being held in basketball and football. Soccer is being played next week.

These are all important opportunities for students to represent the college and mix more broadly across the trades.

As I trust you have read in the recently posted correspondence from Catholic Education SA, I will be on long service leave for the last four weeks of this term. As announced in the letter from CESA Director, Dr Paul Sharkey, Mr Mark Flaherty, Deputy Principal at Xavier College, will be acting principal during this time. 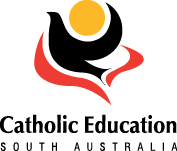 TO THE COMMUNITY MEMBERS OF ST PATRICK’S TECHNICAL COLLEGE

I write to inform you that Mr Rob Thomas is taking Long Service Leave for 4 weeks of Term 2 this year commencing on 9 June (Week 7) until 4 July (Week 10).

I am pleased to announce that Mr Mark Flaherty will take on the role of Acting Principal at St Patrick’s Technical College while Rob is on leave.

I would like to thank him for taking on this key leadership position and know that you will show your support and join me in wishing him all the best as he undertakes this important work at St Patrick’s Technical College.

After a slow start against a much bigger and stronger Torrens Valley outfit, the Fighting Irish closed the gap with strong defence and a high percentage offensive effort in the second quarter. However we couldn’t sustain the performance against the more highly skilled opposition in the second half going down to the eventual tournament winner by 34.

Game two saw a much more consistent performance by St Pats against the host team in Valley View. Consistent efforts at both the offensive and defensive ends from start to finish was punctuated by an amazing second-half shooting display from player of the tournament, Scott Kenny. The twelve point victory margin hides the dominance of the performance, particularly when our game was played without a break from the previous encounter and VVSS having a bye in round two.

Congratulations to the team for displaying exceptional sportsmanship, school spirit and for being so well behaved. You rock!

Many thanks to everyone that has supported the team from Carol Lee in Administration and to Patrick Kelly for coaching.

Unfortunately we did not make it through to the next round.

Students from St Patrick’s Technical College have continued their dominance of the Australian Vocational Student Prizes (AVSP). Once again, all four nominees from St Patrick’s in 2013 have received this prestigious award which will be announced officially in the coming weeks.

We congratulate Class of 2013 graduates, Sarah Voigt (Food & Hospitality), Declan Stanton (Automotive), Victoria Filsell (Applied Engineering) and Nathan Mastantuono (Electrotechnology) on their awards and look forward to welcoming them to St Pat’s in the coming months for an official presentation.

The Australian Vocational Student Prize promotes the value of gaining vocational skills while at school. It acknowledges that vocational education prepares students for further training and employment.

Five hundred prizes, of a certificate and $2000, are available nationally each year. The best of these students will be selected for the Prime Minister’s Award for Skills Excellence in School which carries a prize of an additional $2000.

Each year schools are invited to nominate students who have chosen to do practical, vocational training while completing their senior secondary studies.

This winter we are reminded that the reasons to donate are all around us.

As the months grow colder and the cost of living continues to escalate, we see many families who are struggling to buy food, pay the bills and simply make ends meet.

The reasons to help someone out are all around us in the many cities, towns, neighbourhoods and streets, where people are struggling to keep their heads above water.

Please find your reason for giving this winter and donate to the Vinnies 2014 Winter Appeal so that with your continued support, Vinnies can provide much needed assistance to the people in our community who need it most.

A donation bin can be found in our College administration.  Donations of clothes and blankets can be deposited here.

As part of St Patrick’s Technical College’s commitment to our strategic partnership with TAFE SA, on the first day of Term 2 teaching staff from the College visited the TAFE SA campuses at Elizabeth and Regency Park.

The day included tours of the Regency International School (Hospitality) and the new multi-million dollar Centre for Mining, Engineering & Transport.

During the visits, staff were provided with briefings by those TAFE SA lecturers involved in the delivery of training to St Pats Tech students. Updates on the programs being delivered, the projects students have been involved in and the latest methodologies in delivery were exchanged between all staff involved.

The St Patrick’s team also had the opportunity to meet with the TAFE SA Business Development Manager to discuss ideas to grow the relationship between the organisations through the development of new courses as well as improving delivery of current programs.

Photographs from the day at TAFE can be found on the College’s Facebook page.